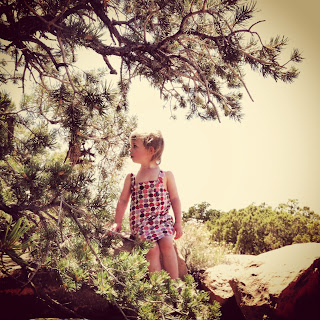 "Kids are so much fun aren't they?"  Blah, blah, blah.  Cliche, cliche, after false, cheesy cliche. 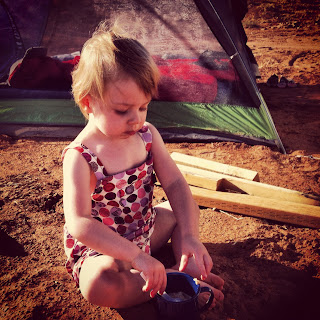 My daughter really is 'the cutest', and she's brilliant to boot.  Generally, she makes being a father incredibly fun and exciting.  It really "melts my heart" (tears and a smile-frown) when she randomly asks to go for a hike, or when she shakes a leg to a good song.  Like every parent, I love seeing her fall in love with the things I most enjoy.  But she's also a kid.  She eats Miracle-Gro and colors on the couch. 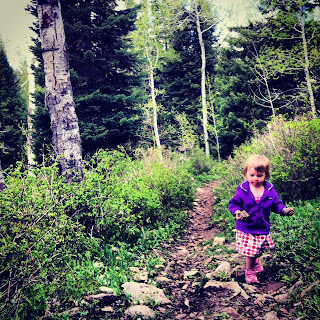 Our recent daddy-daughter road trip to Moab was a lot of fun.  She read books, sang songs, teased me from the back seat of the car, screamed with excitement when we set the tent up, hiked a mile on her own two legs and was generally adorable.  Then, when I wasn't looking, she put about $1.20 of change in the car's CD player. 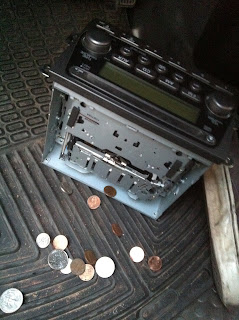 After an incredibly "cute" timeout, and some therapist approved deep breathing, I found some inner peace.  The aux port on the stereo was still working and I have most of my music on my phone.  A small victory over time, anger and words better left unsaid...  But a victory none the less.

Unfortunately it wouldn't last.  Half an hour later, one of those rattling coins caused a short, killing both the stereo and the power locks.  Neither issues could be solved by simply replacing fuses.  It made me laugh for about 2 minutes.  Then the reality of the situation settled in and we were left with hours of silent driving.  Things really could have been worse, but keeping cool isn't always easy.

The key to staying calm?  Realizing I'm not in control of everything that happens around me and of course...  Endless hours of bike riding.  Not to avoid these situations, but to have an outlet for the rage they produce.  When stuff like this happens, I know I can bottle up all those negative feelings, bury them deep inside and let 'em loose when the pedals turn.  There's nothing more relieving than sunshine, solitude and singletrack. 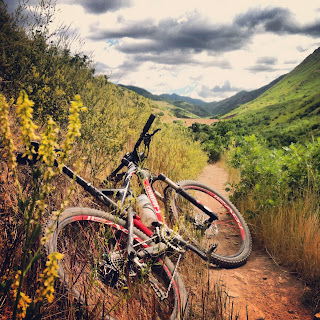 Bikes: the world's most effective form of therapy.

Ah, Spring...  Finally the darkness and depression are behind us.  The trails are drying out and the Mrs. is done with school.  The great waiting game is coming to an end.  Suddenly all things seem possible. 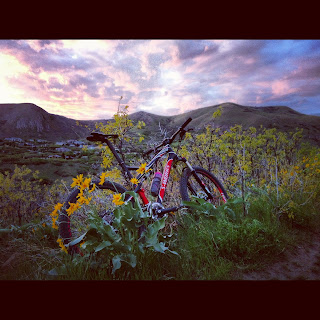 It's time for new places, faces and races.  Racing?  The Caveman?  Sure lets do it.  Weeknight trail rides too?  Why not.  Apply for college, what the hell, right?  I might even fulfill a long time dream to learn me some guitar pickin' and strummin'.

Right now, the big dream is to ride/ race the CTR from Denver to Durango.  It's a total pipe dream considering the longest mountain ride I had done previous to RAWROD was 40 miles.  But gear can be purchased and miles can be ridden...  The bigger obstacle is getting Team Rico to grow some balls and do it with me.  He knows he wants to, but just won't give me the satisfaction.  (Eww!!!  Internet call-out)

On Thursday MacGruber surprised me with an invite to ride the RAWROD (Ride Around the White Rim in One Day).  My first reaction was, "Hell no."  105 miles and only 6600 ft of climbing on a mountain bike didn't sound like a whole lot of fun at the time...  But the more I thought about it, the better the idea sounded.  Mostly because it meant I would spend hours upon hours pedaling my bike around Moab.

Ahh...  Moab.  Heaven of heavens.  The most peaceful, paradisaical parcel the planet has thus provided me.  Perfect serenity. 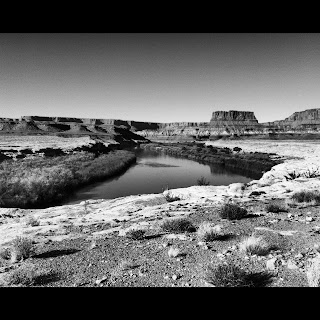 So I took the bait and convinced my astoundingly beautiful, brilliant and kind wife that I should go ride bikes. STRAVA gives me all the evidence I need to prove to her that other people are riding their bikes more than I am (Rico).   I think the passive response, "That sounds miserable...  Sure, I don't care." really meant "Honey if you don't, you probably won't have the base miles you need to compete in the incredibly prestigious Intermountain Cup and equally important Utah State Championship Series.  Ps- I'm so excite for you."


People with high IQ's and superior planning start at Mineral Bottom, luckily I was riding with a few guys with both qualities.  Getting one of three major climbs out of the way with fresh legs was definitely a wise decision. 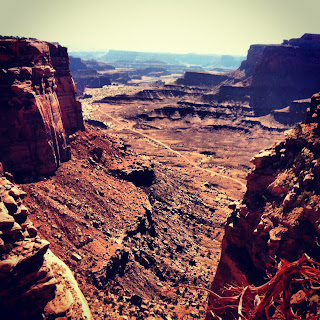 Everything about this ride exceeded expectations.  The terrain was more fun and more challenging than I anticipated.  I felt better than I had hoped to for the first 50, but the last 20 felt worse than I had imagined they would.  The scenery, was just incredible.

We ended up with total ride time just under 8 hours.  I was truly on the brink of collapse all through the final mile, but I made it.

Once we arrived at the trailhead I vowed never to do it again.  Two days later I was planning my next voyage on the White Rim.  I didn't think so at the time, but in retrospect, I think this was the best day I've ever had on a bike...  And I've had a some incredible rides.  I'm thinking no support vehicle next time (we spent too much time waiting for a truck) and even dreaming of a magical tour on a clear night with a full moon.  Just me and some coyotes. 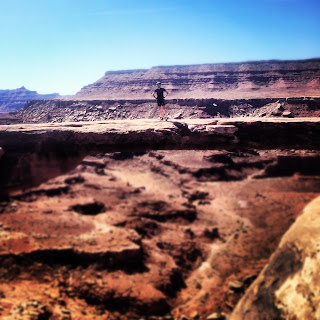 I think I now understand the popularity of endurance mountain bike events, and suddenly see myself looking at routes I previously considered no fun.  Rides like this tend to change perspectives.

Death is rarely something I find unsettling.  I'm not convinced there is an afterlife, and I find a real comfort in the  finality of that outlook.  It pushes me to do the right things in life.  It inspires me to give as much of myself and to make as much of myself as possible, for the good of everyone.  It helps me to prioritize things that really matter in life.  If this is all we have, we owe it to each other to make it the best we can.  We may never have anything better, no paradisaical glory to later attain. There is a sense of urgency to life, but also a reminder to stop frequently and indulge in the beauty and paradise that is around us everyday. 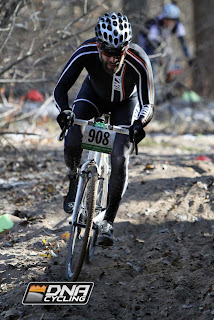 Maybe that's why Matt's death hit me so hard.  He exemplified these ideals like no one else and he fought for them with passion, everyday.  All with a smile, never losing his incredible sense of mischief and humor.  Every race was a better race with Matt there.  It was impossible not to smile when you saw him.

You were an incredible example to me and I will miss you very much. Your impact was lost on no one.  We'll all live better by our strong memories of you.  "So long!!  It's been a good ride!"
Posted by Caveman at 9:59 AM 1 comment: 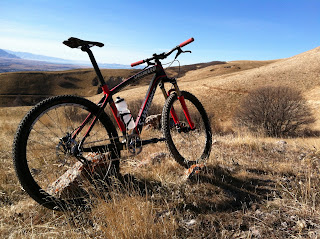 Had great ride on the old single speed on Saturday.  She's a 1/2 size smaller than any other bike I've ever owned, but I don't mind for this setup.  There's not exactly a whole lot of sitting to be done.  She's currently setup with a 34x17t.  I can't tell you how much fun I have whipping a little 26" hardtail around.  She really shines when it gets tight, and tests your nerves when it's open and rocky.  The only time I wasn't smiling was at the top of the so called "Tomahawk Climb", at that moment I was swallowing my own vomit.


Who named that thing anyways?  If I have one criticism for Strava, it's got to be the inability to change a poorly named segment.  In the decade I've been riding this trail, I have never once heard of anyone calling it the Tomahawk.

Big thanks to A-Lo for the lovely company and the fresh stroopwafel.
Posted by Caveman at 10:52 AM No comments: